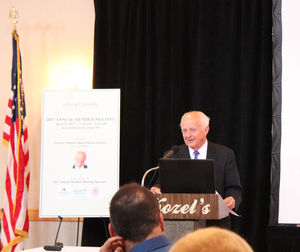 A record crowd of 135 county leaders, business owners and residents attended the annual CEDC breakfast at Kozel’s restaurant on state Route 9H in Ghent, from 7:30 a.m. to 9:30 a.m. Tuesday.

One of the major accomplishments of CEDC in 2016 was naming F. Michael Tucker CEDC president and CEO, said CEDC Board of Directors Chairman Tony Jones.

“We made a transition from Mike [Tucker] as interim executive director to Mike as president and CEO of CEDC,” Jones said. “That enormously important transition puts Mike here, we get the full benefit of his long experience and great skills at economic development. I think that is one of the best things that happened to us in 2016.”

Tucker was named CEDC president and CEO in April 2016.

“It’s been nearly two years since I joined CEDC and about a year ago I was given the honor of being named president and CEO,” Tucker said Tuesday. “Over the past year, we’ve renewed our relationship with the community by engaging stakeholders more than ever before to identify CEDC’s strategy.

“We’ve mentioned our role as the board of supervisors designated coordinator for broadband, working in partnership with the supervisors, town broadband committees and Connect Columbia; we’ve worked in partnership with county officials to identify funding for a proposed sewer expansion project, opening up a major development corridor at Route 9H and 66; and we’ve administered the county’s revolving loan fund, so the county loan fund has almost $900,000 in available funds to lend.”

CEDC also made efforts in 2016 to meet with business owners to figure out their needs and to help them access business resources within the region, Tucker said.

At the breakfast, New York Association of Convenience Stores President James Calvin and Hudson City School District Superintendent Maria Suttmeier were both elected to a two-year term with the CEDC Board of Directors.

Jones, owner and publisher of Roe Jan Publishing, Stair Galleries President and Founder Colin Stair, Kinderhook Bank President Robert Sherwood and Richard Bianchi, a certified public accountant at Shallo, Galluscio & Bianchi CPAs PC, were all elected to a three-year term on the board of directors.

The event featured keynote speaker, Hugh Johnson, chairman of Hugh Johnson Advisors, LLC, who discussed his projections for the national economy in 2017-2018. Johnson’s economic forecast showed a positive continuation of the stock market, he said.

Investors are moving towards riskier sectors of the stock market and are becoming more optimistic about the economy, Johnson said.

Stock interest rates have generally gone up since the November election, Johnson said.

“That means you’re willing to take more risk, or you have a greater level of optimism that you’re going to get interest on that bond, you’re becoming more optimistic about prospects for the economy.

Columbia County Board of Supervisors Chairman Matt Murell provided an overview of the county’s progress in 2016, including reducing back taxes owed from $14 million to $7 million, working on getting county residents access to broadband and creating an opioid epidemic response committee, Murell said.

“A lot of discussion has been on health care and on tax reform and he wants to hear from you,” McAllister said. “He wants to hear how federal legislation is impacting you, so if you have concerns or questions, please reach out to us.”

CEDC Charting a Path for Prosperity