“Blueprint for the Future” was the theme of the Oct. 21 event, where Empire State Development CEO and NYS Commissioner of Economic Development, Howard Zemsky, delivered the Keynote address. The meeting focused on CEG’s future initiatives in support of the regions plan for Governor Cuomo’s $500 million Upstate Revitalization Initiative competition. Tucker was credited for playing a major role in putting CEG and the region in a strong position in the years leading up to the state’s major economic development initiative.

“Mike is fond of the analogy of economic development as a relay race, and most if not all of us here tonight know how hard he ran that race on behalf of the Capital Region and Tech Valley,” said Michael Hickey, Interim President and CEO of CEG.

During his tenure at CEG, Tucker led a shift toward regionalism and cross-sector collaboration, promoted the Tech Valley brand on the global stage and helped shape an environment conducive to high-tech investments and innovation.  After stepping down from his position at CEG over the summer, Tucker, an attorney, real estate broker and registered lobbyist, launched Tucker Strategies, a real estate, energy and economic development consulting firm.

“I look forward to continuing to be engaged and inspired by CEG and the opportunity to explore new ways to enhance the quality of life for ourselves, our family, and our neighbors, and be ready for the attraction and growth we are all working so hard to achieve,” said Tucker. 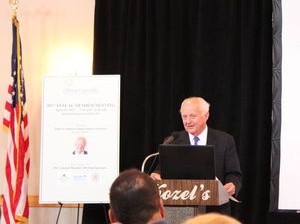 CEDC Charting a Path for Prosperity